I have a piece in the August edition of Prospect which I enjoyed writing perhaps more than any journalism I’ve done over the last decade. It taps into one of my pet obsessions: the domestic cat, felis catus, and its several thousand ambivalent years of interrelation with human society, art and custom.

Below is the opening section. Below, too, is a photo of the incidental stars of the piece: my two cats, Basil (predominantly white) and Jacob (black with white belly). They’re year-old male rescue cats, for those who care about such things. They’re also my noble companions in the scribbling arts: much of the time that I’m working at home, they enjoy lying in various furry combination across my desk. Basil is gently savaging my left hand as I type this, now. I hope you enjoy meeting them, and the piece. 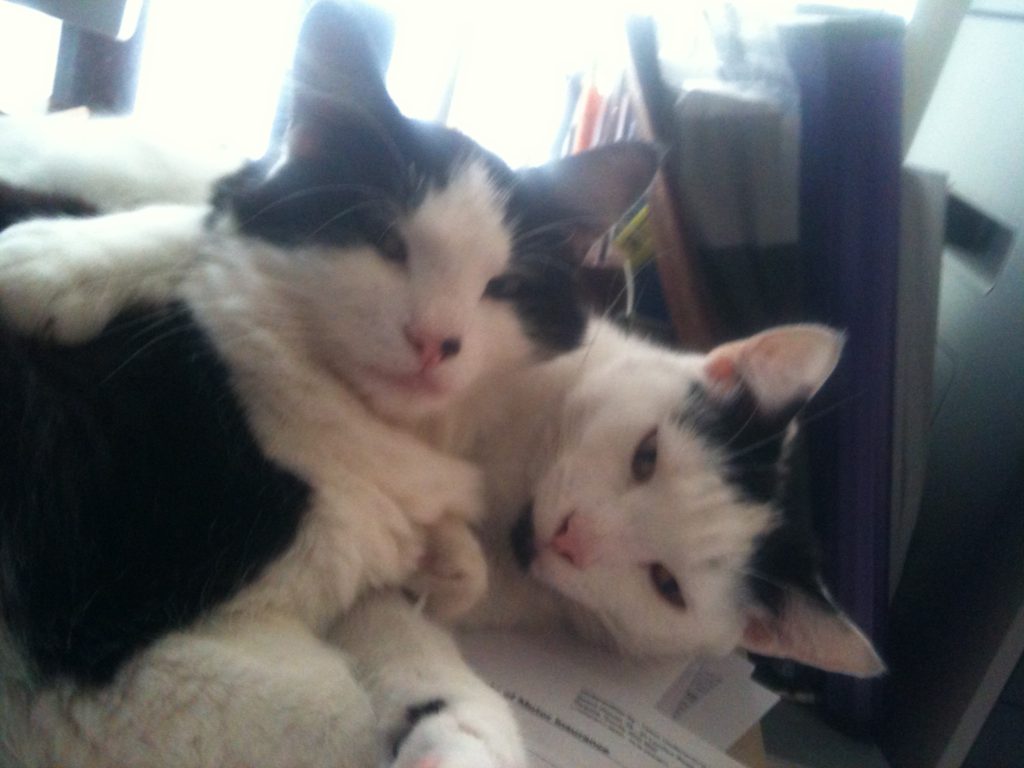 Cats first decided to live among humans over 9,000 years ago. A burial site in Cyprus dating from 7,500BC provides the earliest evidence, with the corpse of an eight-month-old cat carefully laid out in its own tiny plot less than two feet away from its companion human. This gives human-feline cohabitation a more recent pedigree than human-canine, with dogs having lived alongside humans for well over 10,000 years, but puts cats comfortably ahead of such lesser beasts as chickens, ducks, horses, silkworms and ferrets. And among all domestic animals cats boast a unique distinction: to the best of our knowledge, it was them who chose us.

Or rather, cats chose what humans represented: the plentiful supply of tasty vermin that lived among the stock and refuse of early civilisation. In this, the central dynamic of human-feline relations has altered little over ten millennia: food and shelter are welcome, and the bipeds who come packaged with these lie somewhere between a nuisance and a bonus. As I type these words, a well-fed feline called Jacob is lying across my forearms, where he spends much of the day when I’m writing. I know that he appreciates the stroking as well as the feeding; but I’m equally certain that, if our sizes were reversed, the only thing that would stop him from eating me instantly would be the pleasure of hunting me first.